Going up: Your electric bill. Going down: Wildfire risk?

‘When you charge about three times the actual incremental cost of providing the electricity, you’re shooting yourself in the foot’ 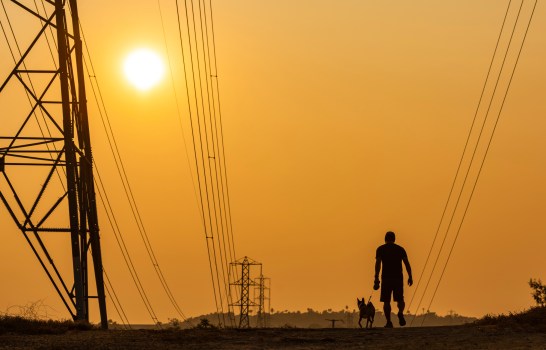 Your electric bill is going up.

The California Public Utilities Commission, which regulates the industry, last week approved a “revenue requirement” hike for Southern California Edison customers that will translate into a roughly 9% increase on the typical bill — about $12.41 more per month when it goes into effect Oct. 1, the PUC said.

Edison had requested a hike that would have added $16.77 to the average monthly bill, the PUC said.

Edison is one of America’s largest utilities, providing power to more than 15 million people in Los Angeles, Orange, Riverside, San Bernardino and other central and coastal California counties.

While Edison’s residential prices per kilowatt-hour were the lowest of California’s three major electric utilities, they were still about 45% higher than the national average, according to a recent study by the Energy Institute at UC Berkeley Haas School of Business and Next 10.

“These high prices result from uncommonly large fixed costs that are bundled into kilowatt-hour prices and passed on to customers,” the Berkeley-Next 10 report said. “These costs cover much of the generation, transmission and distribution fixed costs, as well as energy efficiency programs, subsidies for houses with rooftop solar and low-income customers, and increasing wildfire mitigation costs.”

“This massive gap between retail price and marginal cost creates incentives that inefficiently discourage electricity consumption, even though greater electrification will reduce pollution and greenhouse gas emissions. Changing the way that electricity is paid for can address this issue,” the report said.

Severin Borenstein, professor at UC Berkeley’s Haas School of Business and one of the report authors, said that when utilities increase electricity rates, they are discouraging people from using electricity for their stoves, water heaters, vehicle charging and the like.

“When you charge about three times the actual incremental cost of providing the electricity, you’re shooting yourself in the foot,” he said.

Every three years, the electric companies file what’s called a “General Rate Case.” The goal is to ensure that they have enough revenue to cover the operating expenses and capital expenditures necessary for safe and reliable service.

“This proceeding created the opportunity for the CPUC to make strategic decisions on the future of Southern California Edison’s capital investments, including grid modernization, responses to cyber security risks, and safety investments in response to climate change risks such as wildfires,” said PUC Commissioner Genevieve Shiroma in a prepared statement.

It initially asked for enough revenue to insulate 6,250 miles of power lines in the highest fire-threat areas, but the PUC authorized funding for about 72% of that — 4,500 miles, with the potential for more. That’s about twice as much as an earlier proposal that would have led to more power shutoffs and endangered customers’ lives, Kevin Payne, CEO and president of Edison, told the PUC in July.

The company is pleased that the PUC’s final decision authorizes most of the requested funding for the insulation program, which Payne called “the most cost-effective way to quickly and effectively reduce the risk of ignition and help reduce the frequency, extent and duration” of safety-inspired power shutoffs.

The company is sensitive to concerns about affordability, spokesman Ron Gales said. It recognizes that many customers have continuing hardships from the COVID-19 crisis, and options are available for those who need help with their electric bills, he said. See www.Sce.com/billhelp for details.

A moratorium on disconnections for residential and small business customers began shortly after the pandemic started and expires Sept. 30. After that, customers 60 days behind on payments will be automatically enrolled in payment plans, Gales said.

Under the new plan, customers who qualify for reduced rates will see bills rise $8.39 a month.

The main driver of rate increases is reducing wildfire risks, Edison said. “By adequately funding our wildfire risk mitigation programs, we have the opportunity to reduce preventable ignitions related to our infrastructure,” CEO Payne said in his statement.

That translates to revenue of $6.9 billion for company operations and capital investments, or $730 million less than what Edison had requested, the PUC said. The regulator excluded more than $131 million in executive compensation and employee bonus costs that the PUC said doesn’t benefit consumers.

The amount allows Edison to invest in modernization of its distribution and transmission grids, substations, and energy storage; approves $3.3 billion in spending on wildfire mitigation and allows Edison to buy up to $1 billion of liability insurance coverage for wildfire-related claims, at a cost of about $460 million.

This proceeding does not include costs of purchased electricity or fuel used to generate electricity, which is considered separately, officials said.

“Mitigating wildfires is definitely a climate change impact,” he said. “It’s an infrastructure issue. When it’s roads and bridges, it comes out of the state budget. But when it’s electricity, we put the costs into kilowatt hours, which is a much bigger burden on the most economically vulnerable households.”

An alternative would be to pay for this infrastructure via the state budget, which is primarily financed through income and sales taxes, which are much less regressive than financing it  through electricity rates, he said. Moving to a fixed charge that’s income-based would be another alternative.

“There’s quite a bit of interest in how to lower the burden on low-income families, and in a way that encourages electrification,” he said. “We definitely need to do more wildfire mitigation, that’s absolutely clear. We need to upgrade and harden the grid. Bringing in more renewables means changing the nature of the grid, and when we pay for that through raising rates, we not only discourage electrification and create real inequities, but we send the wrong message to rest of the world: ‘Decarbonization is unaffordable.’